The science of the Nudge 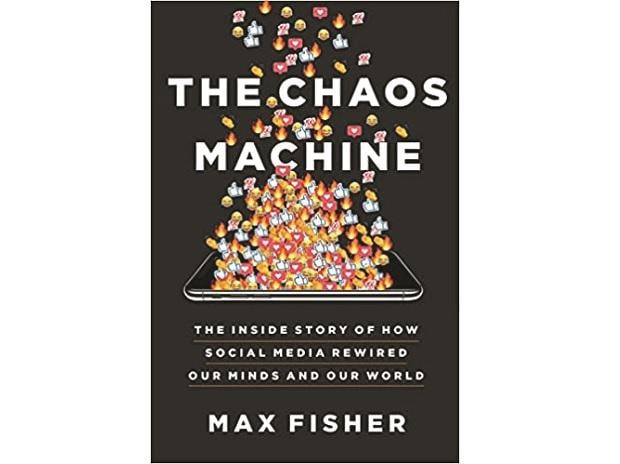 THE CHAOS MACHINE: The Inside Story of How Social Media Rewired Our Minds and Our World


In Max Fisher’s authoritative and devastating account of the impacts of social media, he repeatedly invokes Stanley Kubrick’s masterpiece 2001: A Space Odyssey. The 1968 movie, in which a supercomputer coldly kills astronauts on a ship bound for Jupiter, was in Fisher’s thoughts as he researched the book. Its stark, ambiguous aesthetic is perfectly poised between the utopian and the dystopian. And as a story about trying to fix a wayward technology as it hurtles out of control, it is beautifully apt.


Fisher, a New York Times journalist who has reported on horrific violence in Myanmar and Sri Lanka, offers first-hand accounts from each side of a global conflict, focusing on the role Facebook, WhatsApp and YouTube play in fomenting genocidal hate. Alongside descriptions of stomach-churning brutality, he details the viral disinformation that feeds it, the invented accusations, often against minorities, of espionage, murder, rape and paedophilia. But he’s careful not to assume causality where there may be mere correlation. The book explores deeply the question of whether specific features of social media are truly responsible for conjuring mass fear and anger.


The enjoyment of moral outrage is one of the key sentiments Fisher sees being exploited by algorithms devised by Google and Meta, which discovered they could monetise this impulse by having their algorithms promote hyper-partisanship. Divisiveness drives engagement, which in turn drives advertising revenues. Fisher details the evolution of behavioural technologies that belie the many denials by company representatives that their platforms are inherently or intentionally manipulative.


These denials also don’t stand up against the stated intentions of company founders. In 2017, Mark Zuckerberg wrote an essay claiming that the tech industry would provide the “social infrastructure” of a new stage in human relations. Peter Thiel, a founder of the companies PayPal and Palantir, expressed unambiguously antidemocratic leanings as early as 2009, saying that society couldn’t be entrusted to “the unthinking demos.” He and his Silicon Valley peers, Fisher writes, saw society as “a set of engineering problems waiting to be solved.”


The story of these outsize protagonists is one of hubris and ignorance. In a culture with a high tolerance for crude simplification, the tech billionaires are cloaked in the most clichéd myths of genius: The white male nerd displaying, to use Thiel’s phrase, an “Asperger’s-like social ineptitude” that is so often associated in popular culture (at the expense of any real understanding of the autism spectrum) with savant-like gifts.


But the mythologies mask deep failings. In the opening scene of the book, when Fisher is ushered through Facebook’s “steel and glass playground,” he is carrying leaked documents that outline the platform’s policies on speech. There’s no orderly or comprehensive list, only disconnected PowerPoint presentations and Excel spreadsheets, scattered responses to complex geopolitical matters, outsourced guidebooks with contradictory rules. This is what Facebook’s moderators are equipped with. One of the tech industry’s biggest open secrets, Fisher writes, is that “no one quite knows how the algorithms that govern social media actually work.”


Fisher mentions Zuckerberg’s astoundingly naïve view that “there is a fundamental mathematical law underlying human social relationships that governs the balance of who and what we all care about.” In Fisher’s rigorous quest to understand how social media might have “rewired our minds,” he interviews many psychologists about their academic studies, and discovers insights that will fascinate readers. But he doesn’t treat with scepticism the ultimate premises of a science that both created the malign effects of social media and presents itself as their potential solution.


For as long as psychology has existed as an applied science it has served two purposes: Medical applications, for psychological ills; and military applications, in the field of psychological operations. But psychologists have increasingly embraced the role of social engineers. Social psychology exploits predictable forms of irrationality to “nudge” subjects in particular directions, whether online, at work or in public policy. Positive psychology focuses on well-being and resilience, with the aim of remedying perceived social ills by promoting strengths and virtues. Both branches of psychology have treated humans as manipulable components of societies. And the most important studies of social media’s effects have taken place within these fields.


But basic causal mechanisms still remain opaque. In Myanmar, where social media conspiracies drummed up support for the military’s ruthless campaign against the Rohingya, Fisher acknowledges that “no algorithm could generate hatred this severe out of nothing.” There are of course facts on the ground that determine the algorithm’s effects, the local susceptibility to disinformation, the explosiveness of the divisions. And this highlights an important point: Millions of people use social media without succumbing to conspiracy theories or allowing moral outrage to escalate into violence.


So we need to ask not just what makes some people susceptible to manipulation, but also what in the mind’s “wiring” protects others, even in lives saturated with social media. The answer will presumably include education, and will span the range from individual critical thinking skills to the overall quality of the information environment.


The lesson of Fisher’s book is surely that we don’t need more celestial inspirations for ambitious projects of human transformation. Rather, we need to make individual members of societies resistant to such efforts. We have the means to do so if the political will is strong enough, and if our political system hasn’t yet been wrecked by the chaos machine.