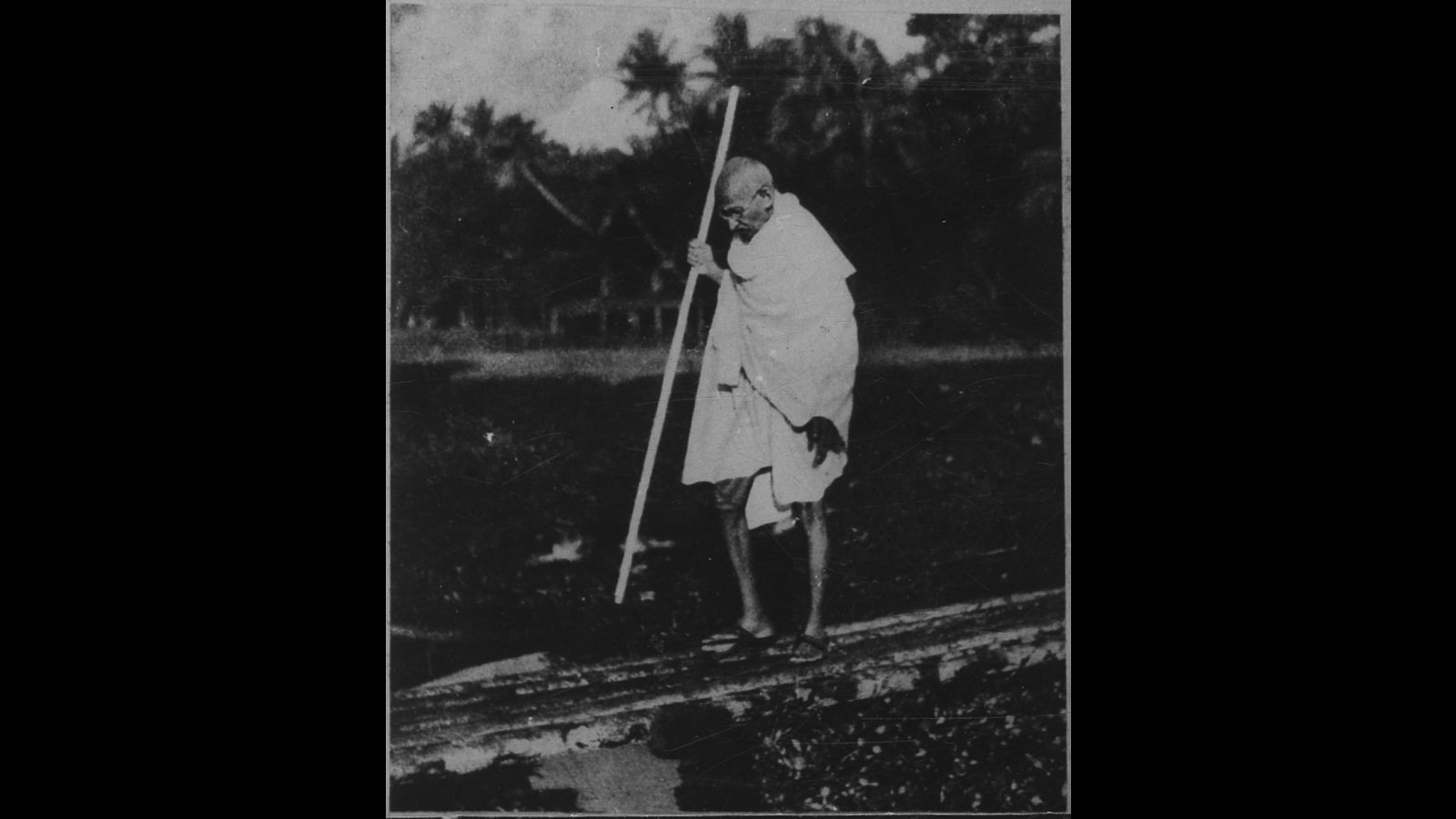 It is widely known that Gandhi, for most of the long period of the freedom movement that he led, was indifferent to the claims of what has come to be called ‘secularism’. In fact… the term made no entry into the Constitution till the mid-1970s… What accounts for this relative absence…? …

…The beginnings of an answer lie in a conviction that Gandhi repeatedly asserted, viz., that Indian history and society and culture were characterized by an unselfconscious pluralism for centuries… It is widely known that secularism had its origins in European modernity… In the seventeenth century, with the rise of the new sciences, old forms of legitimacy for state power that owed to theology (… as in the divine right of the monarch who personified the state) lapsed; and a new justification was sought… At the same time… scattered locations of power were integrated in an increasingly centralized form of state that was to claim sovereignty over the populations of a new form of entity that was emerging, the nation… the political psychology that was now to legitimize state power, so conceived in its fusion with the nation, created a feeling in the populace for…(the nation), thereby bestowing legitimacy on the second. Later, such a feeling came to be theorized under the now utterly familiar label ‘nationalism’.

It was the method by which this feeling was generated in the populace, however, that created the conditions that laid the seed… for secularist doctrine. The method adopted all over Europe was to identify an external enemy within the nation (the Jews, the Irish, the Catholics in Protestant countries, the Protestants in Catholic countries…), to despise and subjugate it, and to claim that the nation is “ours”, not “theirs”. With the rise of numerical and statistical forms of discourse in the study of society, notions of “majority” and “minority” were coined and this method, in particular, came to be called ‘majoritarianism’; and since the majorities and minorities in question were often defined in religious terms, it came even more specifically to be called “religious majoritarianism”. Now, unsurprisingly, there were minoritarian backlashes to this religious majoritarianism. And it was the violence of the civil strife of such conflicts that led many to believe that… it was religion itself… which must now be ushered out of the orbit of the polity. Thus it was that secularism first emerged…

Gandhi’s simple and firm conviction… was that this damage had never occurred in India and so the doctrine had no relevance for Indian society… Indeed, Gandhi declared that Indian nationalism would precisely be defined in contrast with Europe’s, it would consist (of)… a movement accommodating all of the heterogeneity of people and cultures and symbols and traditions.

The question that has dogged scholars for a very long time is the extent to which he (and the Congress party which he gradually came to dominate) succeeded in doing so. And one obvious reason for this is that, in a sense, the very fact of Partition suggests that he had not succeeded…

One thing to note is that, if what I have said captures Gandhi’s very general ground for finding secularism beside the point for the society in which he lived and worked, that very ground has a clear implication for future times. That ground, as I said, declares that since secularism was needed to correct a certain damage caused by certain forms of nationalism in Europe, and since that nationalism and that damage had not occurred in India, adopting secularism for India would be slavish mimicry of one’s colonial masters… Gandhi would not see an adoption of secularism as an uncritical imitation of a European doctrine… our obsessive focus on secularism in the last few decades is quite in accord with Gandhi’s relative indifference to secularism, once we understand what ground and conviction and argument lay behind that indifference. Moreover, it is also implied by his argument, that it is not our secularist concerns now that amount to a cognitive slavery to Europe, but the form of nationalism which prompts them and which has arisen with such increasing force since the 1980s that is the slavish mimicry of Europe.

A familiar and a quite different objection to what I have been saying so far comes from those who think Gandhi was wrong in the first place to think that secularism was not relevant in the period in which he lived and worked because it is quite wrong to think that the European forms of nationalism and the damage they caused only emerged in India as late as in the 1980s when, as a matter of fact, that nationalism and that damage have been with us from much earlier on — and here what is standardly cited is the cultural side of Tilak’s nationalism, Savarkar’s Hindutva, the formation of the RSS, and the non-negligible voice of the Mahasabhite element in the Congress itself from as early as the 1920s.

Such an objection… fails to see that in the trajectory of nationalism, though there are always bound to be different strands that are in play at any given time, usually… one of these strands tends to be dominant and the others much more marginal. In India, there is no doubt that there was a strand of Hindu nationalism that… surfaced… most explicitly in Savarkar. There was also the more Left, class-based, strand of nationalism under Communist leadership, supported as well by the more radical side of the Congress…; and then there was a somewhat different Ambedkarite strand… But there is also no doubt that the Gandhi-Nehru strand in Congress nationalism… dominated the discourse… and, though it did not wholly silence the other strands, it did considerably marginalize them through the three full decades of mobilization.

Once we acknowledge this, we are led… to a second shortcoming in this objection. We need to make a theoretical distinction, in the study of the past’s relation to the present, between roots and antecedents… The strand of Hindu nationalism that we noted… were certainly antecedents of contemporary Hindu nationalism, but they were not the root. To be a root we have to demonstrate an organic causal path from the root to the contemporary flowering, but nobody has demonstrated anything like that causal pathway from these early figures to the rise of the BJP… nor to the phenomenon of Hindutva domination we now are witnessing in the era of Narendra Modi. They were merely antecedents.

…the roots of Hindutva nationalism were laid in the late 1970s and 1980s… let me just mention only two factors… The most obvious factor is the development of a caste-based electoral politics that emerged in the aftermath of the Mandal Commission report, which exposed how deeply divided Hindu society was. It was to suppress and extinguish this exposure that a fiercely determined Hindutva campaign was generated by upper-caste Hindus both in the parliamentary field via the consolidation of the Bharatiya Janata Party (BJP), which was formed earlier in 1980, as well as on the socio-cultural front by the VHP (Vishwa Hindu Parishad), building on the slow grassroots work that the RSS (Rashtriya Swayamsevak Sangh) had been doing all along. This attempt to unify Hindus… was done by the zealous and conscientious cultivation of a European form of nationalism: finding an external enemy to subjugate and hate, and declaring the nation to be “ours” (ie, all Hindus as united against the external enemy, rather than divided by caste), not “theirs”. These efforts became the roots of what we are witnessing now.

A second factor that may plausibly be thought of as laying the very early roots of the BJP’s parliamentary build-up of strength happened a little earlier when the Hindu Right… gained some moral high ground by showing courage in its opposition to the Emergency; courage that was manifestly not shown by the Centre-Left… which lay down like a doormat while Indira Gandhi and her son stamped on the hard-won liberties in independent India. This moral high ground laid the initial roots for the Hindu Right’s respectability in the parliamentary field, which then made possible its subsequent gains in that field via the growing success of the BJP…

All these can plausibly be called the roots of the more pervasive flowering of current European-style Hindu nationalism… As I said, for Gandhi the refusal of secularism is grounded in his conviction that the legacies of India’s long history of an unselfconscious pluralism were not undermined by any such nationalism in the decades of the national movement for Indian independence, during which Hindu nationalist voices were marginal… given the very nature of Gandhi’s argument, once those roots did lay down several decades later and Hindu nationalism has flowered from them… it would be his position that secularism is rightly seen by us to be relevant and central for our time…