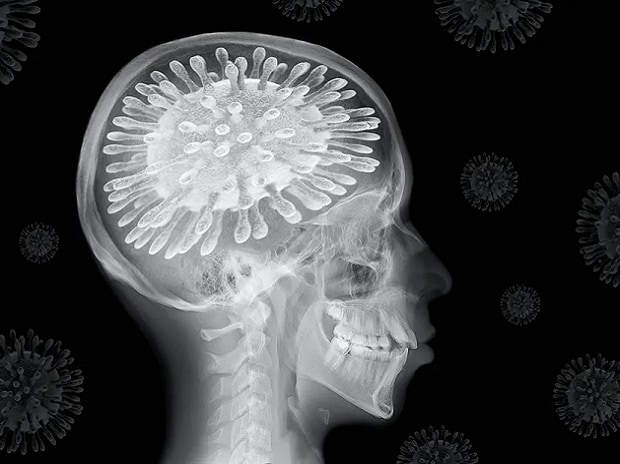 People infected with the SARS-CoV-2 virus are at increased risk of developing a range of neurological conditions in the first year after the infection, according to a large study conducted in the US.


Such complications include strokes, cognitive and memory problems, depression, anxiety and migraine headaches, the researchers said.


The researchers at Washington University School of Medicine also found that the post-COVID brain is associated with movement disorders, from tremors and involuntary muscle contractions to epileptic seizures, hearing and vision abnormalities.


The infection is also associated with balance and coordination difficulties as well as other symptoms similar to what is experienced with Parkinson’s disease, they said.


“Our study provides a comprehensive assessment of the long-term neurologic consequences of COVID-19,” said Ziyad Al-Aly from Washington University.


“The results show the devastating long-term effects of COVID-19. These are part and parcel of long COVID. The virus is not always as benign as some people think it is,” Al-Aly, senior author of the study published in the journal Nature Medicine.


The researchers noted that, overall, COVID-19 has contributed to more than 40 million new cases of neurological disorders worldwide. Other than having a COVID infection, specific risk factors for long-term neurological problems are scarce.


“We are seeing brain problems in previously healthy individuals and those who have had mild infections,” Al-Aly said.


Few people in the study were vaccinated for COVID-19 because the vaccines were not yet widely available during the time span of the study, from March 2020 through early January 2021.


The data also predates Delta, Omicron and other COVID variants.


A previous study in Nature Medicine found that vaccines slightly reduce — by about 20 per cent — the risk of long-term brain problems.


“It is definitely important to get vaccinated but also important to understand that they do not offer complete protection against these long-term neurologic disorders, Al-Aly said.


The researchers analysed about 14 million de-identified medical records in a database maintained by the US Department of Veterans Affairs, the largest integrated health-care system in the US. Patients included all ages, races and sexes.


Statistical modeling was used to compare neurological outcomes in the COVID-19 data set with two other groups of people not infected with the virus. The researchers examined brain health over a year-long period.


Neurological conditions occurred in 7 per cent more people with COVID-19 compared with those who had not been infected with the virus, they said.


Memory problems or brain fog are one of the most common brain-related, long-COVID symptoms, according to the researchers.


Compared with those in the control groups, people who contracted the virus were at a 77 per cent increased risk of developing memory problems.


“These problems resolve in some people but persist in many others. At this point, the proportion of people who get better versus those with long-lasting problems is unknown, Al-Aly said.


“It’s unlikely that someone who has had COVID-19 will just get Alzheimer’s out of the blue, Al-Aly said.


“Alzheimer’s takes years to manifest. But what we suspect is happening is that people who have a predisposition to Alzheimer’s may be pushed over the edge by COVID, meaning they are on a faster track to develop the disease,” he added.


Compared to the control groups, people who had the virus were 50 per cent more likely to suffer from an ischemic stroke, which strikes when a blood clot or other obstruction blocks an artery’s ability to supply blood and oxygen to the brain.


Ischemic strokes account for the majority of all strokes, and can lead to difficulty speaking, cognitive confusion, vision problems, the loss of feeling on one side of the body, permanent brain damage, paralysis and death.


“Our study adds to this growing body of evidence by providing a comprehensive account of the neurologic consequences of COVID-19 one year after infection,” Al-Aly added.