A tour of non-human reality 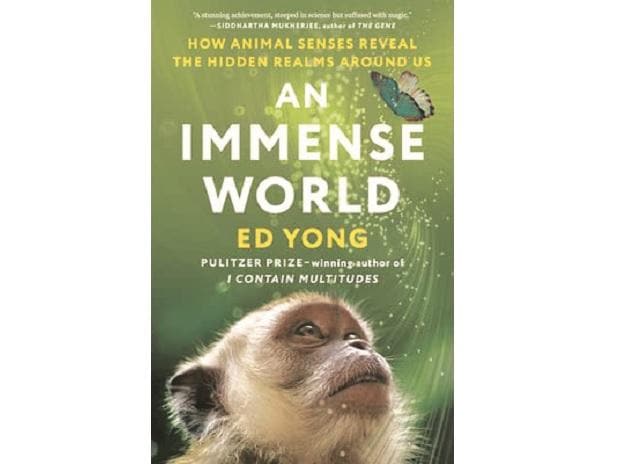 AN IMMENSE WORLD: How Animal Senses Reveal the Hidden Realms Around Us


A dolphin that echolocates a human in water can perceive not only the human’s outer shape but also what’s inside, including the skeleton and lungs. Tree frog embryos — ensconced inside their unhatched eggs — can detect the vibrations of an attacking predator and release an enzyme from their faces that dissolves the casings that house them, allowing them to exit and escape.


That I found myself surprised at so many moments while reading An Immense World, Ed Yong’s new book about animal senses, speaks to his exceptional gifts as a storyteller — though perhaps it also says something regrettable about me. I was marvelling at those details because I found them weird; but it turns out, if I try to expand my perspective just a bit, they aren’t so weird after all. One of Yong’s themes is that much of what we think of as “extrasensory” is “simply sensory.” A term like “ultrasound” is “an anthropocentric affectation.” The upper frequency limit for the average human ear may be a measly 20 kilohertz, but most mammals can hear well into the ultrasound range.


Yong offers these facts in a generous spirit, clearly aware that part of what will enthral readers is discovering just how few of these facts many of us have known. I would have called the book “illuminating,” but Yong made me realise how much bias is baked into an adjective like this; humans, as a species, are “so relentlessly visual” that light for us has “come to symbolize safety, progress, knowledge, hope and good” — and so we have illuminated the planet to make it a more comfortable place for us, while making it less inhabitable for others. Artificial lights have been a fatal attraction for sea turtle hatchlings, migrating songbirds and some insects, steering them toward predators or disorienting them to the point of exhaustion.


Yong’s book is funny and elegantly written, mercifully restrained when it comes to jargon, though he does introduce a helpful German word that he uses throughout: Umwelt. It means “environment,” but a little more than a century ago the Baltic German zoologist Jakob von Uexküll used it to refer more specifically to an animal’s perceptual world.


The animals in Yong’s book are mostly nonhuman, but scientists are necessarily part of his story too. “A scientist’s explanations about other animals are dictated by the data she collects, which are influenced by the questions she asks, which are steered by her imagination, which is delimited by her senses,” Yong writes. The human Umwelt will necessarily shape how we apprehend other Umwelten. An Immense World inevitably refers to the philosopher Thomas Nagel’s foundational essay on this struggle, “What Is It Like to Be a Bat?”


The book is organised by stimuli and their corresponding senses, beginning with smell and taste and extending to the ability of some animals — birds, bumblebees — to detect Earth’s magnetic field. When it comes to sight, there’s a trade-off between sensitivity and resolution; humans tend to have extraordinary visual acuity during the day but have a much harder time seeing at night, while animals with better night vision don’t register the crisp images at a distance that we do. “Senses always come at a cost,” Yong writes. “No animal can sense everything well.” The world inundates us with stimuli. Registering some of it is taxing enough; fully processing the continuous deluge of it would be overwhelming.


Still, an animal will use the various senses it has at its disposal to make sense of the world around it. A mosquito is attracted to the heat of warm-blooded hosts, but it will only attack if it first smells carbon dioxide — the sensation of heat without carbon dioxide isn’t a meal for a mosquito but a sign of possible danger. A researcher tells Yong that protecting humans from mosquitoes is a complicated undertaking, requiring her to consider multiple senses at once; the tiny insect has “a plan B at every point.”


But Yong isn’t all that interested in the familiar question of how to exploit the senses of animals for human benefit; he wants us to try to understand how animals experience the world so that we can understand how animals experience the world. “Animals are not just stand-ins for humans or fodder for brainstorming sessions,” Yong writes. “They have worth in themselves.”


If there is a benefit to trying to imagine ourselves into the experiences of others, maybe it lies in the enormous difficulty of doing so; the limits of every species’ sensory bubble should serve as a reminder that each one of us has purchase on only a sliver of reality. Yong would like us to think more expansively — something that humans are, it turns out, equipped to do.


Thinking expansively would help us realise that nature’s true wonders aren’t limited to a remote wilderness or other sublime landscape — what Yong calls “otherworldly magnificence.” There is as much grandeur in the soil of a backyard garden as there is in the canyons of Zion. Recognising the breadth of this immense world should spur in us a sense of humility. We just need to get over ourselves first.

Business Standard has always strived hard to provide up-to-date information and commentary on developments that are of interest to you and have wider political and economic implications for the country and the world. Your encouragement and constant feedback on how to improve our offering have only made our resolve and commitment to these ideals stronger. Even during these difficult times arising out of Covid-19, we continue to remain committed to keeping you informed and updated with credible news, authoritative views and incisive commentary on topical issues of relevance.

We, however, have a request.

As we battle the economic impact of the pandemic, we need your support even more, so that we can continue to offer you more quality content. Our subscription model has seen an encouraging response from many of you, who have subscribed to our online content. More subscription to our online content can only help us achieve the goals of offering you even better and more relevant content. We believe in free, fair and credible journalism. Your support through more subscriptions can help us practise the journalism to which we are committed.